In as much as money is good, without a good understanding of money, we keep falling into errors
-Jesupelumi Oluwagbemi
Before we can talk about financial literacy, we must first understand the concept of money. We cannot embark on the journey of being financially literate without first knowing what money means, what money is and what money is not.
I know of nothing more despicable and pathetic than a man who devotes all the hours of the waking day to the making of money for money’s sake
–        John Rockefeller
The race for wealth is one many of us keep finding ourselves in. We all want to be wealthy and we don’t mind doing anything to get there. We don’t mind any form of hustling just to get money. We have put ourselves in a web of pressure because we need to make money. We have even thrown ourselves into a competition with others. It’s even more terrible that we begin to low-grade ourselves to those with more wealth than us. For many, their self-esteem has been dented and their self-worth reduced all they haven’t gotten as much wealth as their peers. Many have lost the basic essence of life in the pursuit of wealth. Many have neglected the important in the quest of attaining much. Many have even lost their peace, their health and other valuables still in the pursuit of wealth. To many, money is life, in fact, money is their god. And unfortunately, we live in an age where success is measured with wealth. Such that, once a person has that car or that estate, that person is successful while the person who hasn’t achieved up to that is not regarded as successful or rather ascribed little success.
Now, don’t get me wrong one bit, money is good. Who doesn’t want or need money. Definitely, it is almost impossible to live without money. Money pays your bills. Money affords you a life of comfort and convenience. Money helps you create legacy that will keep producing recurring income for your generations and so on but the sad thing is that money has been widely misconstrued. There is so much pressure in this age to get wealth. In fact, I can even say that the pursuit of wealth has been overrated. There has been an undue obsession for wealth in this age, more reason why people sacrifice delayed gratification on the altar of instant gratification. I want us to fully grasp the understanding of the concept of money because without this first established, we can’t progress in our journey of financial literacy. We can’t talk about how to take control of your money or ways of multiplying your money if you don’t even know the purpose of money. Haven’t you heard of people who had great wealth and lost it all over a period of time? When the purpose of a thing is not known, abuse is definitely inevitable. It is even more bemusing to see and read about people who have worked tirelessly to make tons of money only to realize that it has somewhat being a chase of vanity, most probably because the right value were not placed.
In this module, there would have to be an unlearning of many things. These can be described as weights that will constrain us from making notable progress in our finances.

To be  continued here

Do ensure you read the continued part to fully grasp the lessons in this module.

We believe in you!

To your financial independence and freedom 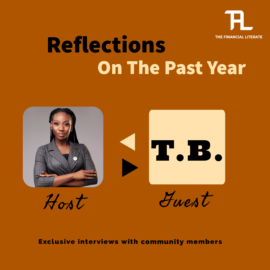